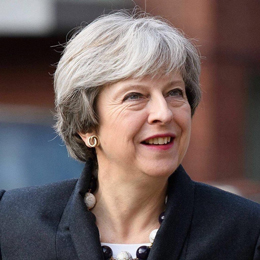 Theresa has served as Member of Parliament for Maidenhead since 1997. She has held several positions within Parliament since 1997. She was a member of the Shadow Cabinet from 1999 to 2010, and from 2002 to 2003 was the first female Chairman of the Conservative Party. In 2010, she was appointed Home Secretary, a position which she held for 6 years before becoming Prime Minister in July 2016.